The Story of Belly Dance in Fredericksburg (VA) 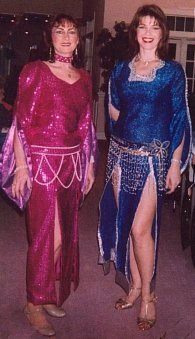 By 1997 my dance friend Donna (Iesha), who was also a member of Topkapi Folkloric Troupe, had moved to the Fredericksburg area, so we began collaborating as the Diva Dancers. We performed belly dance shows at local Senior Communities, Rehab Centers; private parties and special events. Our efforts opened many local doors to the art of belly dance. Two wonderful students from my Stafford belly dance class joined us as well, Oriana and Ya Meena. in 1999, Rob Hedelt wrote a Free Lance-Star article introducing me to Fredericksburg.

After moving into Spotsylvania, several students began studying with me at my home studio, and we performed a couple of times as Anima Mundi. In early 2000 I put on my first belly dance show in Fredericksburg, with a handful of dancers including my local students, former Charlottesville students, and several dancers from out of town including the lovely dancer Joy. This was held at Ken Crampton's Eyeclopes on Caroline Street, and I called it "An Evening Of Bellydance, Drumming, and Fun". We had some local press coverage too, which helped my Parks and Rec. classes get started.

As the Diva Dancers, we produced two sold-out weekend belly dance workshops called "Dancing In The Woods" (in 1999 and 2000) that featured two days of classes as well as percussion and dance jams. Workshop attendees came from 3 states to learn with us. These events gave my new weekly classes in Fredericksburg a wonderful boost, and our belly dance community was born!

In the summer of 2000 the Diva Dancers also produced a spectacular all-professional show, "Magic of Belly Dance", featuring professional soloists and troupes - a first in Fredericksburg. Our guest teacher was Malika of D.C., whom I knew from working with her at the Marrakesh. Malika and I had also collaborated briefly in a performing venture she called Mediterranean Images.

In April of 2000 I also produced a successful Dance and Frame Drum Workshop with Tahya of PA, which was well-attended.

After the year 2000, my Fredericksburg students and I began performing around town; and besides the Diva Dancers I had three other performing groups: Pearls of Rhythm, PRISM Dancers, and Tribe Odyssey; so in 2005 I founded "Dance Eternal Productions" to bring them all under one name for local shows.

While the Diva Dancers and these student groups were a wonderful way to bring music and dance to Senior Communities and other local events, there was nowhere in Fredericksburg to perform as a soloist, as I had been doing in the DC area for years. While I was still commuting to DC to perform in clubs and restaurants, I really wanted someplace to perform locally.

I knew if Oriental Dance - in the form of Raks Sharki or as it was called "cabaret style" - was featured regularly in Fredericksburg it would not only introduce the art to the general public, but would help to grow our little belly dance community too.

It wasn't until March 2005 that this opportunity happened: the owner of the local Middle Eastern market opened a cafe, and I began dancing every Friday night at Nader's Middle Eastern Cafe (on Plank Road) before heading to my regular DC gigs. I was able to introduce my protege Adara Janaani there as a soloist, and one of my other students, Basima, danced there a few times as well. They were both lovely dancers and always professional and reliable. Iesha also worked there for a while, and since Nader wanted more dancers for both Friday and Saturday nights, I called in Noor Jihan and Nimeera from the DC area to help fill the schedule. When word got out that Fredericksburg had a belly dance venue, more dancers come looking for a spot. This provided my students with an introduction to the highs and lows of professional dancing!

I lost my spot at Nader's the next January, but luckily another local restaurant began to have dancing, so in February of 2006 I began performing at the lovely Indian restaurant Radhuni (on Plank Road) on Fridays; once again before commuting to my regular DC gigs. Radhuni also began featuring other dancers on Saturdays, so Fredericksburg belly dance was booming!

Radhuni closed after a couple of years, but working there was interesting for me because the owner kept me informed of the belly dance politics happening behind my back; stories that matched what the Marrakesh staff were telling me. It seems that one of the DC dancers (who shall remain nameless) really wanted my gigs. This was not one of my dance friends but a new performer whose husband had just been stationed at Quantico. It seems that she was talking about me to managers and trying to get me fired, with limited success. This kind of thing comes with the territory when you're a professional dancer so I took it in stride; and as I said it provided an interesting education for my students!

It can be hard for new performers to deal with the reality of professional dancing; seeing strange dancers turn up looking for a job (YOUR job) can bring up feelings of insecurity and jealousy. I know that having outside dancers come into town was a bit of a shock for my student performers because they had to deal with this particular lady too, but there wasn't much I could do other than give advice.

In the fall of 2006 Aladin Kabob and Hookah (on Plank Road) began featuring weekly belly dancing; so I worked there before heading to my DC gig. I again filled the dance schedule with reliable performers including Noor Jihan and Nimeera; and was also happy to introduce my former student Kiyaana to the Fredericksburg dance scene.

All that dancing meant I needed a hip replacement (here's my post THR blog) so I retired from solo performances in January of 2008, doing my last gig at Aladin; so I never worked at the new restaurant that opened later in 2008, Laziza (on Plank Road). But I was happy to hear they were featuring weekly belly dancers, and it seemed the community was going strong. Until I retired, I'd worked hard at keeping Raks Sharki visible in the local community, and from 2006 to 2011 Fredericksburg had at least one restaurant featuring weekly professional belly dance shows. Though it's hard to imagine now, for a short while there were actually three local venues with weekly dancing! But with the closing of Laziza in 2011, regular Raks Sharki performances ended. Currently Kiyaana performs sometimes at Aladin restaurant, but at the moment there are no regular weekly dance venues in Fredericksburg.

Meanwhile I was busy with students and our multiple performing groups, as you can see in the photos on the Happenings pages. Besides performing with Iesha as the Diva Dancers, for several years I had three student performing groups: Pearls of Rhythm troupe; PRISM (Oriental belly dance); and Tribe Odyssey (Tribal Odyssey group improvisation). I had to let Diva Dancers go, and Iesha kept dancing with Topkapi. Even so, having three groups was too confusing, so around 2005 I consolidated my student performers into one group: the PRISM Dancers.

More history about the defunct groups:

My one and only troupe (with formal membership) "Pearls of Rhythm" was founded in 2000, and performed until 2004. Highlights include winning Second Place (performing "Tribal Odyssey" synchronized group improvisation) at the 2002 East Coast Classic in Virginia Beach. Besides showcasing various styles of Middle Eastern dance, our shows featured members performing original percussion compositions on authentic Mideastern instruments like doumbeks, tars, riqs; and even a little bit of classical Arabic song. The members had outside homework too, including assignments like researching and writing about the dance. Here are two dance articles by troupe members.

The Free Lance Star interviewed me in 2003, followed us during rehearsal and a show at Casablanca Restaurant in Alexandria (VA), putting  together an interesting multimedia article on the Pearls of Rhythm in 2003.

"Sometimes the planting of a seed necessitates its death, the death of your fondest hopes, before it can be reborn to bear the fruits of new life and new opportunity."  - The Urantia Book, (48:6.36).
I found managing a troupe too stressful, and disbanded the Pearls in 2004; deciding instead to continue group performances with a less formal bond of dancers. Much, very much, good did come from the trials of the troupe in the form of personal growth while learning to deal with others. The 3-step Conflict Resolution I still use is part of the fruits of that struggle, as were the revelations of Chakra Energy in Belly Dance.

Tribe O East began performing in late 2000, and around 2005 I folded this group into the PRISM Dancers. Miramar continued with her group, Tribe O West, for several years.

Because Miramar and I were working on an instructional DVD for Tribal Odyssey and needed music, in 2007 I began creating original music (under the recording name "Tribe O"). Making original music seemed  easier than dealing with music royalty issues! I still use the name Tribe O for my music, and on Twitter I'm @TribeO. You can follow Tribe O music on Facebook, and download songs there or from Reverbnation. I often use Tribe O music for my instructional videos on YouTube, to avoid copyright issues.

And that's a short history of our belly dance community here in Fredericksburg. I'm happy to see it continue to grow even in these tough economic times, because dancing brings us joy!