My years as a belly dancer at Marrakesh

The website for the original Marrakesh restaurant in D.C. is www.marrakeshdc.com

In my performing career I worked in many places around the DC metro area, but the Marrakesh stands out. Other places are also in my heart, like the Casablanca in Alexandria, and Attila's in Arlington; but my time at the Marrakesh was different. 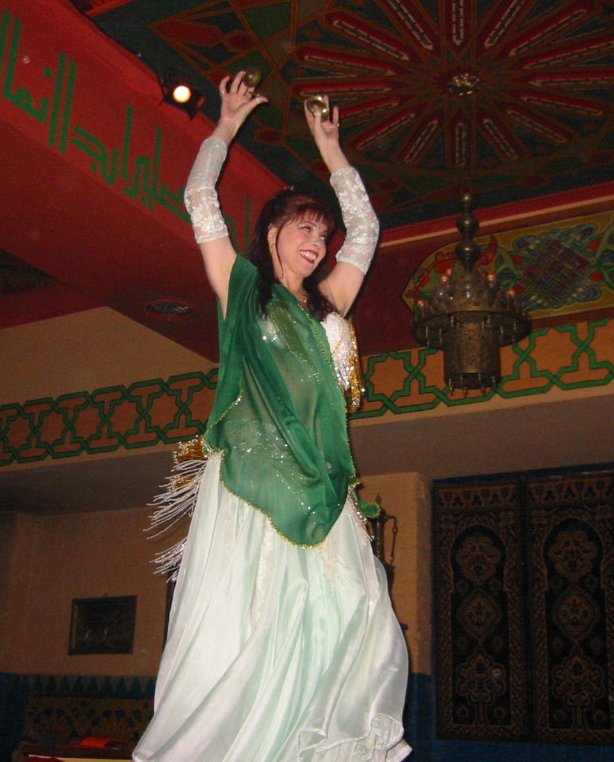 Why do I consider it one of the best places I worked?

Working at the Marrakesh was a good fit for me from a dancer's point of view because the shows were regular, the sound system was great, and the show itself was well produced. Also, they paid the dancers like clockwork each week, with no problems. The owners and staff were always respectful and helpful. This made my time there really enjoyable.

The Marrakesh was also unusual because they had belly dancers not just on the weekends, but every single night - they only closed on Thanksgiving! On the busiest nights, Fridays and Saturdays, there was an early show (about 7 pm) and a late show (9 pm) in the main dining room; but often on the weekends the dancers would also do a show either upstairs or in the Kaslik club in the back.

I'm lucky that when I was working as a professional belly dancer, the economy was better. And the owners of the Marrakesh knew how to do business well enough to not only stay open, but to thrive. It seems that in today's economy (2013) many venues have closed and dancers can only get a spot on the schedule by rotating or "sharing" the gig with numerous other dancers. In the belly dance world, to keep a regular dance gig for 15 years (without a contract) is a little unusual so that's why I'm writing about it.

The Marrakesh kept me busy, and then some

I started working at the Marrakesh in 1992, thanks to the lovely Xena, a student of Zarifa Sa'id (Libby Parker). Xena called and told me the Friday night spot was open (this is as close as I can recall after so many years). So I called Raj, who was the manager at the time (he later opened Sahib, where I also worked) and he asked me to come down. Because it was such a long way (about 65 miles from where I lived in Virginia with my children in a little old farm house), I declined to audition for free. Luckily I came recommended by Xena so it worked out and I went down and danced, got paid, and also got the gig; in fact I got four nights! For the next two years I danced there Monday, Thursday, and the late show on Friday and Saturday. Sometimes they would call me in for private parties during the day; and of course, there was an episode of "Unsolved Mysteries"* filmed there that I danced in as well.

In 1994 they gave Monday nights to another dancer, so from then through 1999 my nights at Marrakesh were Thursday, Friday, and Saturday - the busy nights! Of course I was still working at other venues before or after the Marrakesh show because the economy was good, the metro nightlife was busy, and that's what dancers do. However, I became ill in 1995 (the owner, Bashir, even came to see me in the hospital - but he was probably just checking up on me!), and when I recovered he offered me an exclusive deal for Fridays (meaning I wouldn't work anywhere else that night) which was great, because I was exhausted. For a while I'd been doing the early show at Raj's in Olney MD, driving to Marrakesh for one or two shows, then going to Atilla's for the late show with the band, and driving home. No wonder I was tired!

It was always fun when I'd run into the early-show dancer in the Marrakesh dressing room - I got to meet some really cool dancers that way. Of course there were some who weren't so nice too! I continued doing three nights a week there until 1999 when I decided to cut back to just Thursday and Friday. I wanted to have my Saturdays free for local gigs or workshops - it really felt like a treat to have Saturdays back to myself.

In 2003 I also gave up Thursday nights so I could begin offering more classes in Fredericksburg; and I continued dancing only on Fridays at the Marrakesh. After four more years though, I was ready to retire because of physical issues. My last show at the Marrakesh was in July 2007. I do miss the Kouchacji's, who were so gracious to me and my children over the years. 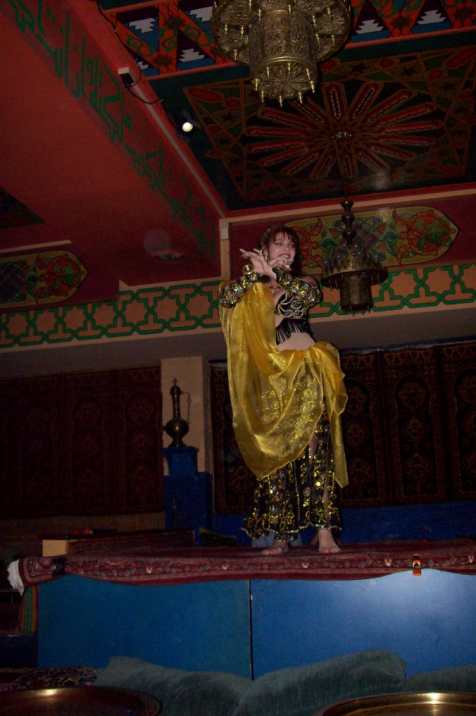 (This photo is from my last show at the Marrakesh, which was really special for me with my friends and family there)

Most dance gigs don't last long. When a dancer has a steady gig at a venue it's hard to keep it because other dancers, especially newcomers, are always trying to step in and get that  spot - especially for the good (weekend) nights. Many, many times I saw new dancers come in and audition; some never came back, but some did get a regular night there, and it was always good to see a dancer who was professional. Many dancers got on the schedule but were replaced pretty soon afterwards. I guess the less I say about that, the better!

Of all the places I worked, the Marrakesh will always be my favorite, not only because the professional way they produced the dance  performances, highlighting the dancer and giving the audience a great experience; but because they treated me, and my family, exceptionally well.

Have you ever danced on a flying carpet? 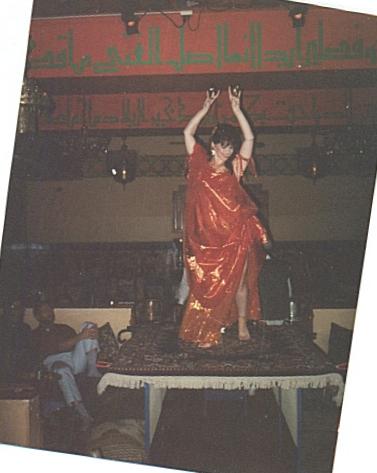 The photo above was taken in the main dining room, the floor of which which was slightly slanted from front to back (the location was corner of New York Avenue and 6th Street, NW). It's not a great photo, but you can see the odd stage that disappeared between shows like magic!

There was almost always someone in the audience celebrating a special occasion. So just before showtime, the lights would go off and the staff would quickly assemble the stage while the special guest were brought a baklava with a lit sparkler in it... while of course, the Arabic version of our Happy Birthday song playing loud enough to cover the commotion of the stage. Then the dance music would start and up we'd go onto the platform. I would always test it before the lights came on to make sure it was put together correctly, because a few times I had to get down and have them adjust it so it didn't wobble. I never fell off, but it was scary to dance up there, especially since the lights were blinding. Yes, quite an experience.

Dancing in the Kaslik Club at the Marrakesh

(photo by Zara / S. Dodd)  Of course my favorite moments were seeing friends in the audience, which didn't happen often since I lived 90 minutes away. This photo (pink costume) was from one of the times I saw my Richmond VA friends from the Women of Selket, who of course are great belly dancers themselves. This was taken in the Kaslik Club, a separate section in the back of the Marrakesh. I had already been working at the Marrakesh for years when one day I went in and saw a hole broken into the wall, revealing a separate bar, dance floor, and dining area. What a surprise! Every section of the Marrakesh was filled with gorgeous Moroccan decor, and the Kaslik was no exception.


The upstairs dining room at the Marrakesh

There was also an upstairs dining room at Marrakesh that was often used during the busy weekend nights; here I am performing my signature Raks Assaya during the mid-1990's. My Marrakesh performances were a mixture of American cabaret style and Egyptian belly dance; in "Am Cab", as they say, every dancer used to have a specialty, and mine was cane. Other dancers would use sword, tray, tambourine, candelabra, or a snake.

Performing so regularly for so many years not only helped me hone my dancing skills, but explore performing from the inside-out. A dance job can get tiring, uninspiring, and rote; and performers get burned out. I had to learn how to manage myself physically, mentally, emotionally, and spiritually so each performance would be a positive experience for me. I had to be fully present each time, and approach the performance and audience with respect; and this approach carries over into teaching as well.

It was often lonely, but gave me plenty of time to think. Exploring the inner world or performing has been a real gift. I've tried to write on these topics in my articles on performing, and I hope other belly dancers find them helpful.